Earlier this week, on May 11th I caught about one minute and a half of a program on Eckankar.  After my wife switched the channel I searched for more information about Eckankar online.  Howard Klemp echoed many of the things I had been inspired to write over that past few years.  The religion seemed to encompass many of my beliefs.  What was even more incredible was that a picture appeared on the site which contained two images dear to me.  The first was that of a White Hawk which came to me in a vision about a month ago and a powerful concentrated light which I envision as I connect to Spirit.  I knew I was being guided.

Several weeks prior I had prayed for guidance and clarity along the path He intends for me to follow.  I asked for a place that fit my beliefs.  Now I could see that I had my answer.

I decided to follow through and visit the Eckankar Center.  Immediately upon entering I meet several people who have been experiencing the same synchronicities and serendipities as I.  We shared testimony of how Spirit was working in our lives and I could see that He once again had brought me to where I needed to be.  The service lasted from 10-11am, but I stayed over two hours after in fellowship.  Talk about hours seeming like minute; I was there for over two hours after the service had ended.

I left the Eckankar at 1:11 and headed home.  While on the highway I was directed to a license plate with 811 on it.  I shortly after noticed another plate that read ANNMARIE.  My mom’s birthday is August 11TH and her name is Anita Marie Ash.  Her friends called her Ann; my little sisters middle name.

It turns out that I was visited by an ECK Master last week who advised me on breathing exercises related to manifestation, meditation and to tell me to not get over anxious, but to listen and learn.  Her picture was in the front area of the center.  The first man I shared with told me of his experience with her as a child.  He told me she always wore a blue dress in his visions.  This is what she wore in mine too.

The night before I found Eckankar I was visited by a women with very distinctive eyes and white/gray hair wearing a blue dress.  I felt her great wisdom.  She came to give me a message, “I was to listen and understand all that I did not know.”  She quickly left me and went off on her own.

The next day I could not get her out of my mind.  I kept recalling the telepathic conversation which took place and the lesson she taught me about an inward breathing exercise to assist me in my manifestations.  Her name would soon be revealed to me.  It was Kata Daki!

This morning I had a vision of the center prior to coming.  It was very similar in size and space.  Also, I was told by Spirit to dress casually for the service and was shown several members dressed in casual attire.  I recognized several people from the vision.

When I returned home I had some breakfast and settled in.  I decided to sit in my chair and look over the welcome information I received.  Prior to opening it up I looked out the front door and notice a large blue illuminated mist passing slowly over some shrubs.  I asked my son if he had thrown something outside and told him what I saw.  He said, “I did not throw anything.”

When exploring the information I seemed to be called to the book Ancient Wisdom for Today.  I opened it up right to chapter 11 and began to read about disciples, angels and masters.  Once I read page 102 I realized what I had seen.  The ECK Masters had let me know of their presence and appeared to me “by a blue or white light.”

The name of my ministry is Disciples of Love Ministries.  ECK is about preparing disciples and this service was about love.  Another non coincidence was that last night I reposted my message “Hallways and Doorways” which contained my quote “Empathy is the hallway and love is the doorway.”

Now I am beginning to understand who all these unknown people of great strength and wisdom have been in my past visions.  This is where all the knowledge that I am receiving is coming from.  I am being guided by many ascended masters.  As I am doing what they ask they are continually moving me forward.

The first 3 minutes are always free.

The Wisdom of Life 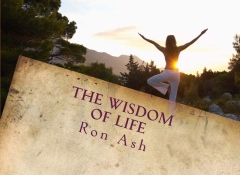 Sales and The Law of Attraction

The Secret of Divine Intervention

THE BEST WAY TO PREDICT THE FUTURE IS TO CREATE IT