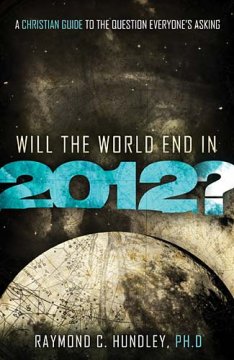 Will the world end in 2012?  There are many theories as to what exactly will end.  Over the centuries there have been many times of transition; entire civilizations have gone extinct.  The way of life for millions of people has changed time and again.  In the United States alone; being one of the youngest countries in the world, we have experienced major shifts in the way we earn our living, raise our children and even worship our God.

So with all this in mind we must look at what will be the next transition in our infinite ascension through a looking glass full of many possibilities.  Raymond C. Hundley closely examines many of the possible scenarios claimed by various experts in a vast array of fields.  His book Will the World End In 2012 takes us on an intriguing journey through the many theories revolving around this critical question.  Although it is billed as a Christian guide to the questions everyone’s asking Hundley remains neutral through the majority of the book and lets his research pretty much speak for itself.

He starts out with an overview of the Mayan’s and the fact that their calendar ends in 2012; one of the most well know initiates of the end of times controversy.  The author further examines the possible effects of solar storms on the planet and how they could cause multiple catastrophes throughout the earth.  Everything including possible scientific blunders; philosophical predictions; the reversal of magnetic poles; a collision with an unknown planet; eruption of a super volcano; galactic alignment and religious theories are expounded upon.

I found this book to be educational and somewhat interesting, but I also found it to be very easy to put down.  It seemed as if the publisher could have done more to push the entertainment envelope.  Will the World End in 2012 is a book that begs to be elaborated upon.  However, I would recommend it as a book to read in between the must reads.  It is a tasty treat that is more palatable when served a bite at a time.

By The Intuitive Life Coach™

Ron Ash will intuitively identify root issues, access key problems and formulate a highly effective approach and resolution. Through proven techniques the Intuitive Life Coach™ will help you to move confidently in the direction of your dreams.

View all of The Intuitive Life Coach™'s posts.