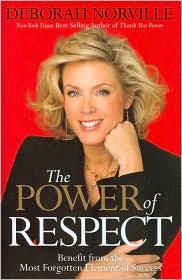 Deborah Norville’s book “The Power of Respect” was written to exhibit the value of respect in today’s world.  It is collection of stories in which respect played a major role in creating positive situations in relationships of all kinds.  She claims that respect is the most forgotten element of success in living, playing and working with others.

I especially liked her thoughts on the power of respect at home.  She states and backs up with real world examples of how children learn from what their parents do.  How they will deal with others will largely depend upon how they see their parents act and react with others.  She instructs parents to “model for your children the behavior you want for them.”

Although there were several interesting snippets throughout this book this reader did not feel it to be one of the better books on respect.  I would have liked to see more of Deborah’s personality, personal experiences and heart rather than a seemingly endless flow of so called professionals on this topic.  To me it seemed like a lot of speculation masquerading as scientific fact.  I would much rather hear pure heartfelt real life situations and circumstances in which the power of respect was exhibited in the author’s life.

The book is a worthwhile read, but as far as books on respect go I would encourage readers to pick up a copy of “Love and Respect”.  Love is admiration and respect is consideration.  Love and respect really go hand and hand.  In regards to “The Power of Respect” I would have to say, “Great attempt, but something is missing.”

Much of the advice in this book is common sense.  The author speaks of “The most forgotten element of success” without properly stating what it is to be successful.  The word in itself is void of value.  After all, my Beagle is very successful at being a dog.  What is success to one is rarely success to another.

By The Intuitive Life Coach™

Ron Ash will intuitively identify root issues, access key problems and formulate a highly effective approach and resolution. Through proven techniques the Intuitive Life Coach™ will help you to move confidently in the direction of your dreams.

View all of The Intuitive Life Coach™'s posts.